Way back in undergrad I decided I wanted to learn to knit. I made the decision fairly spontaneously in the middle of a craft store while I was buying painting supplies, tossing a skein of variegated worsted weight acrylic yarn into my basket. It was Red Heart’s Super Saver economy line, and its color is called Painted Desert. It evoked so many tranquil, outdoorsy thoughts in its mix of jewel tones with a warm tan and sienna color that I just had to learn how to knit it.

My mother lent me a pair of her needles and taught me how to cast on and make a knit stitch (I’m sure this is why I knit English – my mother is left-handed). I didn’t learn to purl, so the first thing I ever knit, over the course of several years in college, was a massively wide garter-stitch scarf-wrap type thing that I wore outside of the house exactly once. 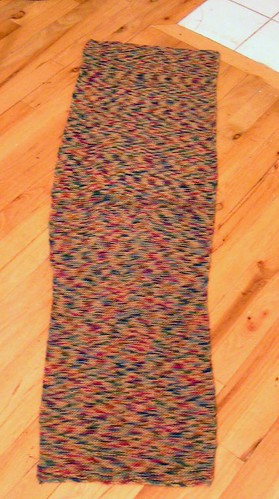 It was a disaster of dropped and accidentally added stitches, wonky irregular gauge, and basically all the classics of a new knitter’s mistakes. In 2006 I decided to learn to knit again, branching out beyond garter stitch rectangles, and it stuck. I found a sweater pattern that I thought would show off the little bursts of color in this yarn, and I bought quite a few more skeins. I knit up the back in what became a somewhat Ravelry-famous example of spectacularly dizzying, ugly pooling. 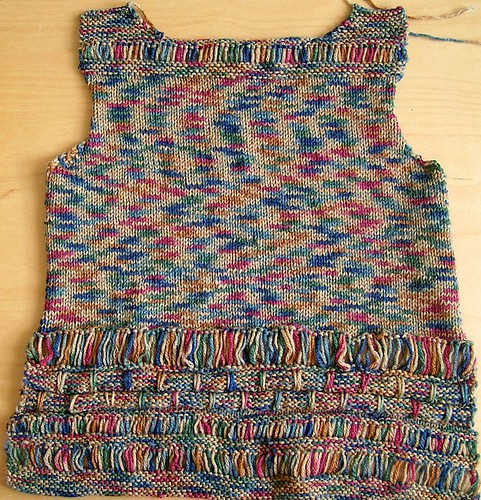 Not surprisingly, I frogged it, and the yarn hung out for years. It actually looks pretty nice in a ball, so I was willing to relegate it to a random decorative accent on my bookshelf, but it bothered me. 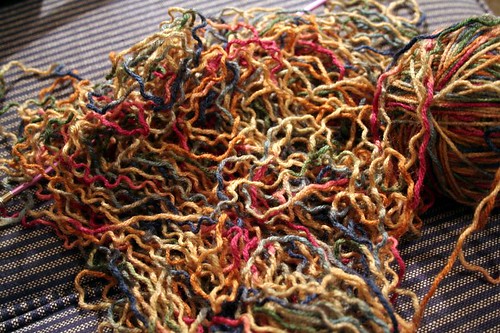 I kept thinking there was a secret to this yarn that I hadn’t cracked. I didn’t like the way it looked in garter stitch, nor in stockinette. Because I have such a large quantity of it, I was considering working it into an openwork afghan. I don’t know what made me think of it again, but I browsed through all the projects using this yarn on Ravelry, and I saw a beautiful seed stitch scarf. I fell in love with the fabric and immediately cast on. 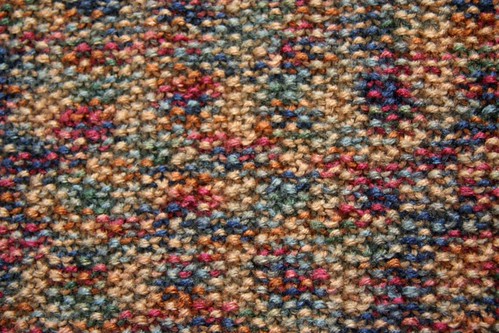 It is so pleasant to watch the colors shift and combine in seed stitch. Each color tends to stretch about 3-4 stitches, and although it has pooled a touch in some places, I like it overall. I’m so pleased to have found a way to make this yarn do what I knew it could. 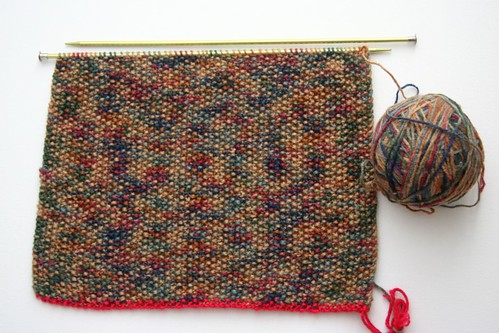 I have a whole slew of projects planned with this yarn in seed stitch, starting with a moebius scarf, then matching hat and gloves. I also want to make a set of cushion covers for my couch and maybe some slippers or house socks. I expect pretty soon I’ll be surrounded in Painted Desert yarn.