As Easter approaches, April seems as good a time as any to finally post the wintry Christmas gifts I gave my family this past year, right?

Back in 2010, I knit my father a pair of socks for Christmas in this beautiful green and brown variegated yarn (you can see the yarn here, but alas, I have not photographed the socks yet). He loved them, and he frequently told me how much they meant to him, but he kept them pristinely folded in his sock drawer unworn because he “didn’t want to mess them up.” I always said, “I made them for you to use,” then reminded him how much I love knitting, should they ever need replacing.

This winter, on one of those particularly bitter cold and damp days, my father was outdoors and no matter what he did, couldn’t get his feet warm. He and my brother stopped home for lunch and he looked in his sock drawer, dismayed, hoping maybe he would find another warm pair he could layer in his boots. As he tells it, his eyes went to the handknit socks and he heard my voice echoing, “I made them for you to use!” He slipped them on and said his feet were properly warm for the first time in decades. “They are absolutely the answer,” he said enthusiastically when he called me that night, “I can’t believe I waited so many years to realize it!” 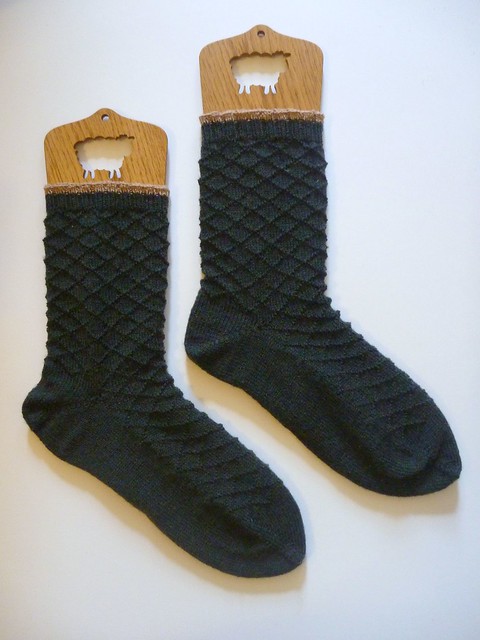 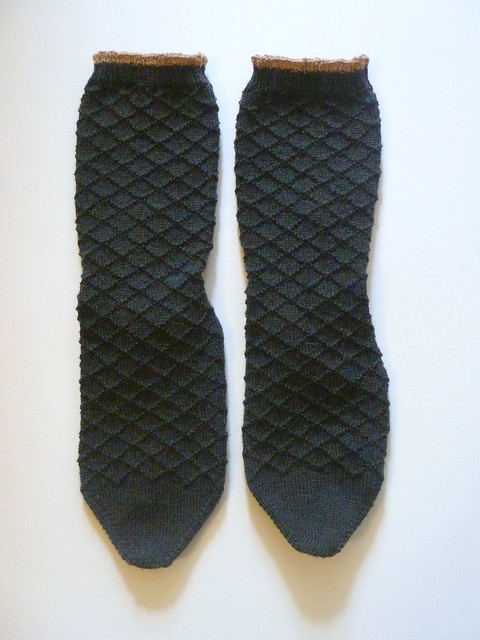 A few days later, after wearing his handknit socks outside every day with delight, my father called to ask how he should wash them, and I talked him through it. He said now that they were his new “secret weapon” in keeping his feet warm, he didn’t want to risk running them through the wash. “The only downside,” he said cheerfully, “is that I have no idea what I’ll wear while they dry.” I immediately ducked into my stash and pulled out this great dark green Regia superwash, wrapped it, and presented it to him on Christmas as A Second Pair of Socks, Some Assembly Required. 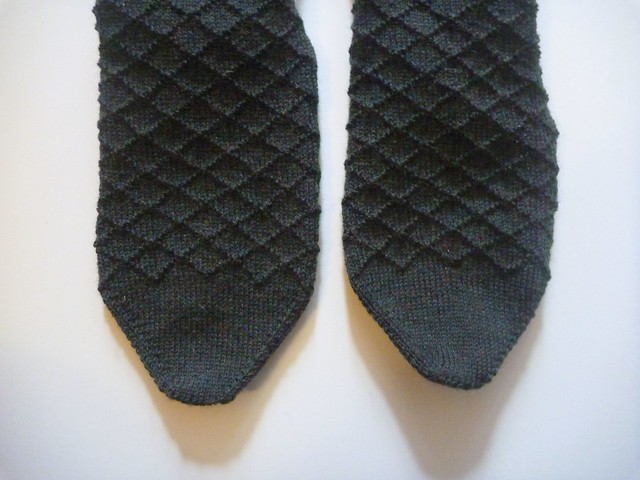 I wanted to knit his second pair in a slightly finer gauge, now that I was sure of the measurements and that he’d actually wear them, but I hadn’t brought needles or the pattern with me. I had a pair of socks that I’d been keeping at my parents’ house for months as my “away” project, and as I finished them next to the Christmas tree, I realized I could cast on for my father’s second pair right then. I figured I would get the toe started and consult the pattern when I got home, but I came down with the first of several terrible colds I’ve had this year (with bonus bronchitis!) and while I malingered at my parents’ house, decided to improvise the pattern by looking at photos of finished socks on Ravelry. 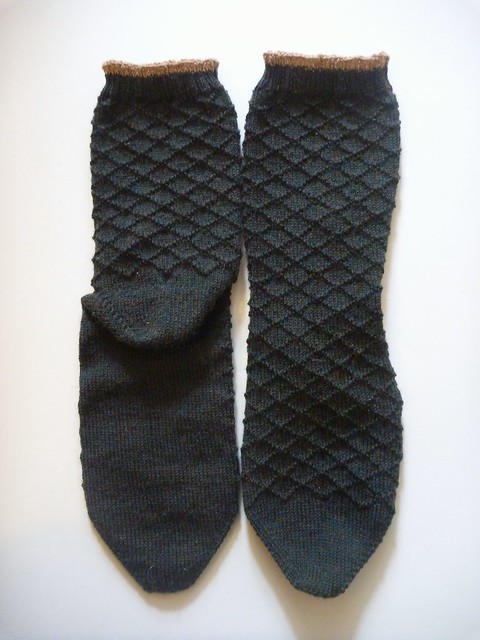 By the time I got home, I’d knit through the heel and worked out how to keep the pattern continuous around the ankle, so I decided (with apologies to the genius Nancy Bush) that I’d just wing it, and my socks would be knit in my “house style,” which I know fits incredibly comfortably. I knit the leg of the sock as long as I could before I started running low on yarn, then started the ribbing. I was dismayed to run out of yarn sooner than I expected, so I tipped the ribbing in a bit of light brown Merino superwash from my stash. My father likes that detail as a design choice and noticed that the Merino is slightly softer than the Regia wool, so it’s extra cushy where it touches his shin. 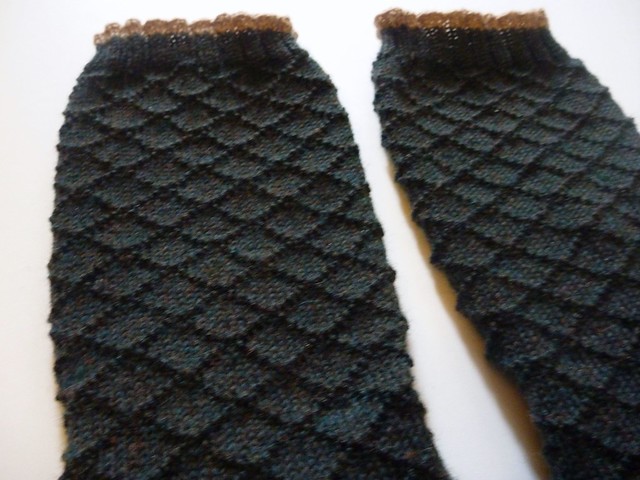 My father loves these socks and has raved about how they are even warmer than the first pair I knit him. Beyond the tighter gauge, he also noted that the diamond pattern traps little pockets of air around his feet inside his boots, so they are both breathable and extra warm. He likes the color and style so much that he said he’d wear them with work or dress shoes the next time it gets super cold in the winter.

I’m so happy he loves his socks so much – he was telling everyone at our St. Patrick’s Day party how great they were. I’m also delighted he has discovered the joys of custom-sized handknit socks, as I have quite a few more colors of yarn with his name on them. He also promises we’ll take some modeled shots soon.