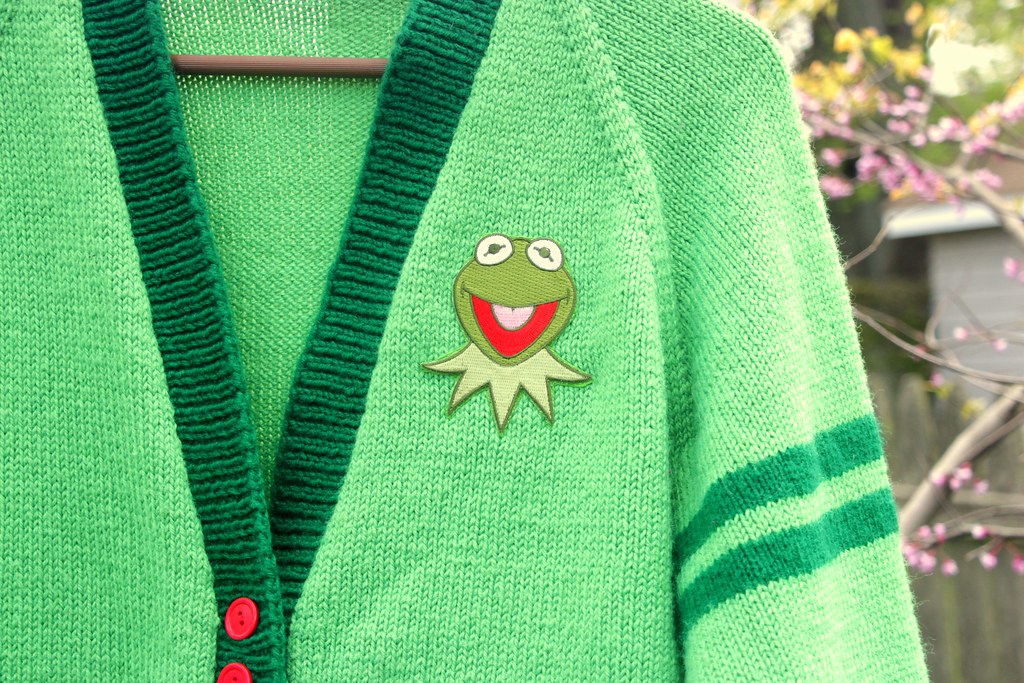 Way, way back in 2011 I sketched out the plan for this sweater and finally today, on Kermit the Frog’s 65th birthday, it is finally finished. Yaaayyyyy!!! 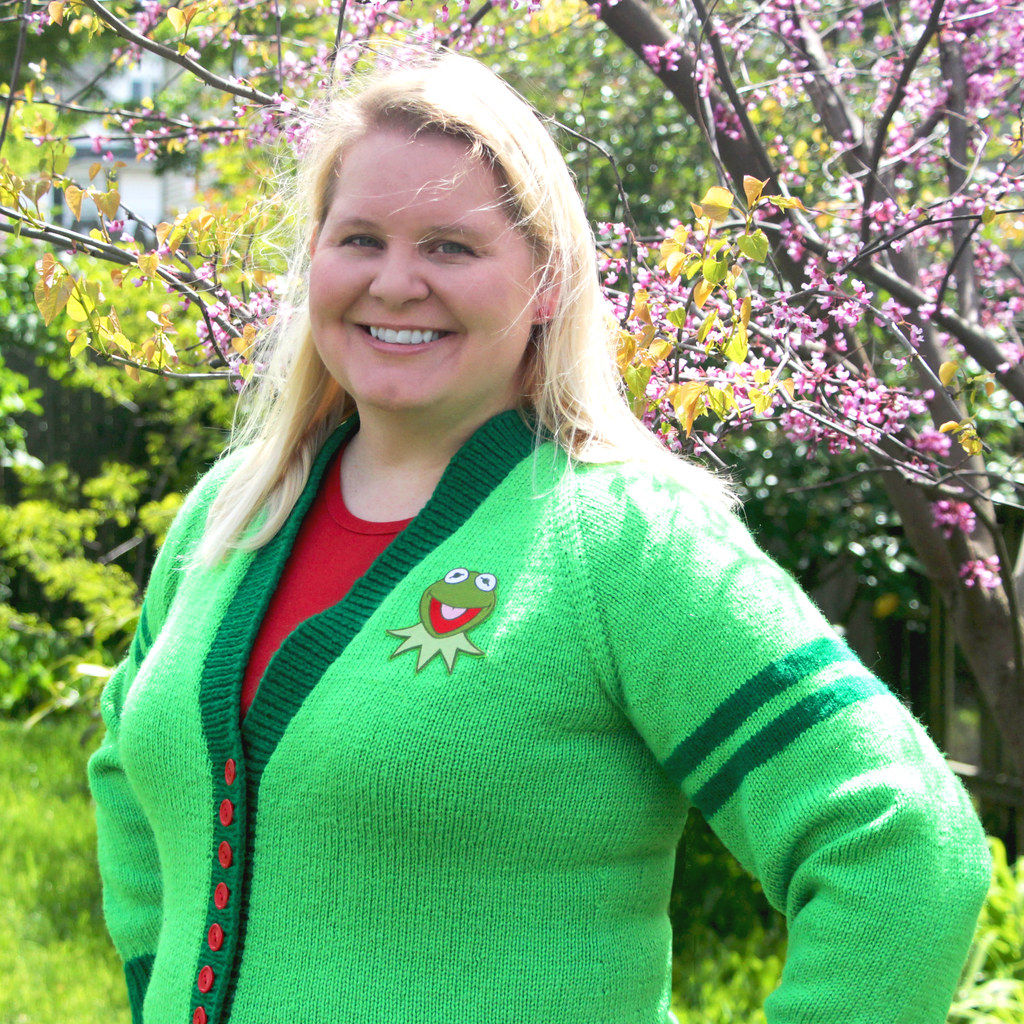 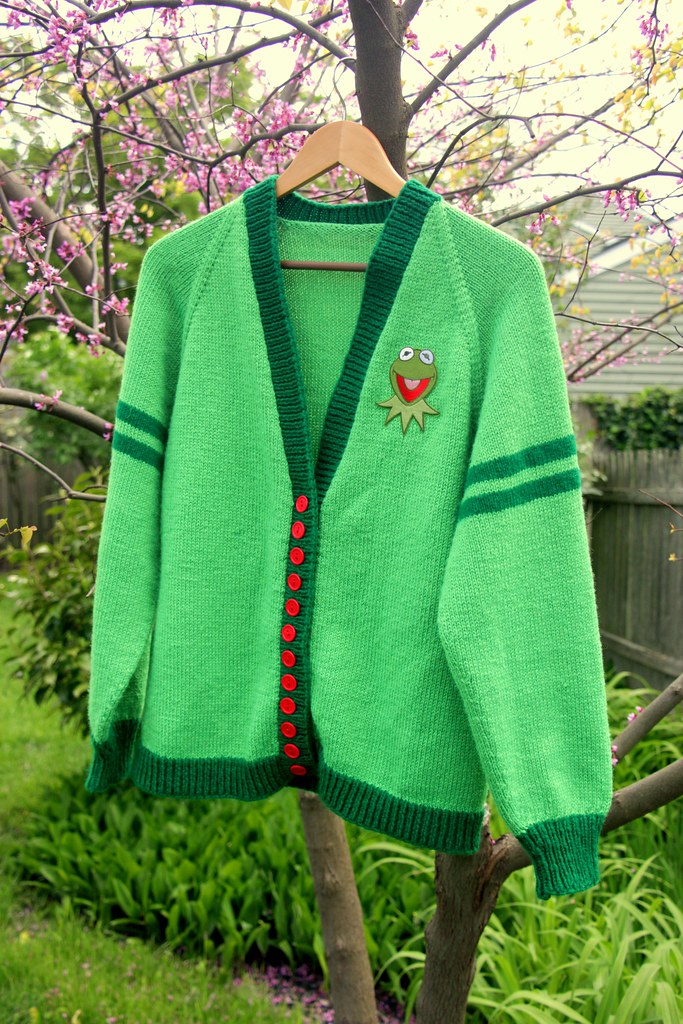 The idea for this sweater had been percolating for much longer, at least as far back as 2007 when I bought this yarn for a different cardigan and laughed that the color was so bright it looked like Kermit the Frog. It should be noted here that I absolutely love Kermit the Frog. As I type this I have a Kermit mouse pad, Kermit is the screen background on my phone, I have a Kermit keychain, more than a few Kermit t-shirts, dolls, water bottles, and so on. He is one of my favorite characters of all-time and never fails to make me smile.

One day riding the ferry home from school, I was thinking about this sweater quantity of bright green yarn and saw a high school student wearing a varsity jacket. I started thinking about the history of varsity sweaters, Googled a bit about the meaning of the stripes, and by the time I reached Staten Island I had sketched out a little V-neck cardigan to declare my varsity-level Kermit love. 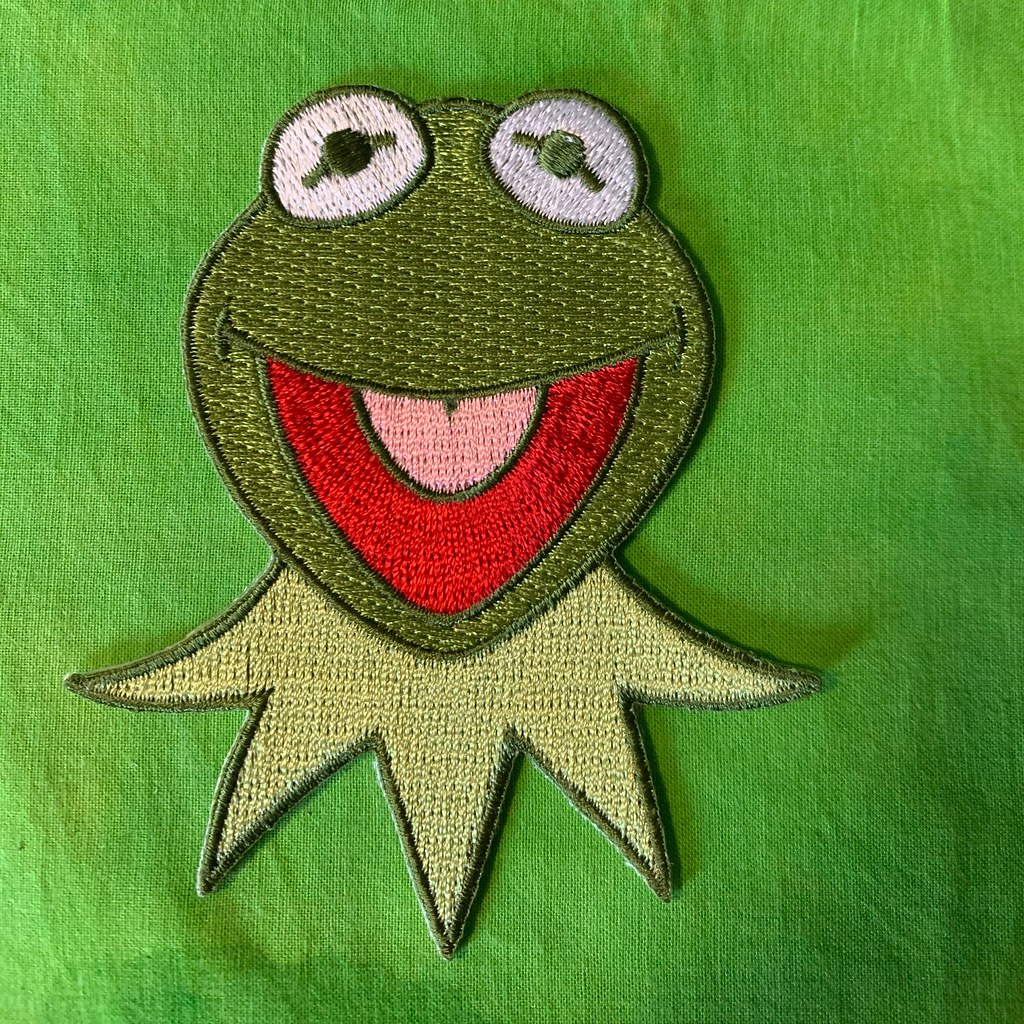 I found an iron-on Kermit patch and ordered it right away, then worked out the measurements from the custom-fit raglan worksheet linked above. I found a nicely coordinating darker green for the ribbing and stripes, and I decided that even though varsity sweaters customarily had stripes on only one sleeve, I would indulge myself in a bit of symmetry so both sleeves would match. Knitting the sweater was straightforward and fast, but then I hit a roadblock with the patch. As the yarn was 100% acrylic (chosen for economy, my super sensitive skin, and easy care) I was leery about ironing the patch on, as it would melt the acrylic along with the adhesive.

I sat with this problem for close to a decade, then finally came up with an incredibly obvious solution. I first ironed the patch onto a piece of quilting cotton, then made a sort of sandwich of this layer, the sweater, and a second piece of cotton for a backing. 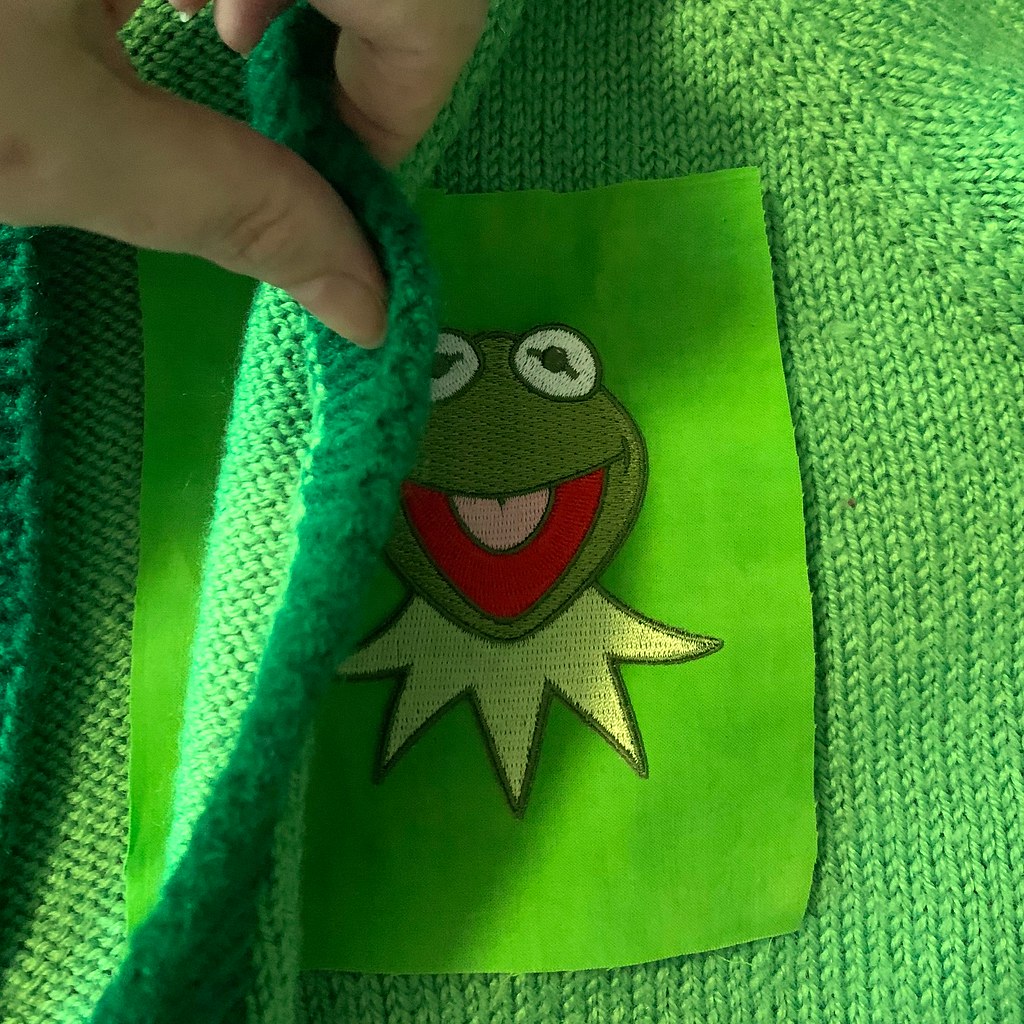 I trimmed the fabric close to the patch and pinned it where I wanted it above my heart on the sweater. 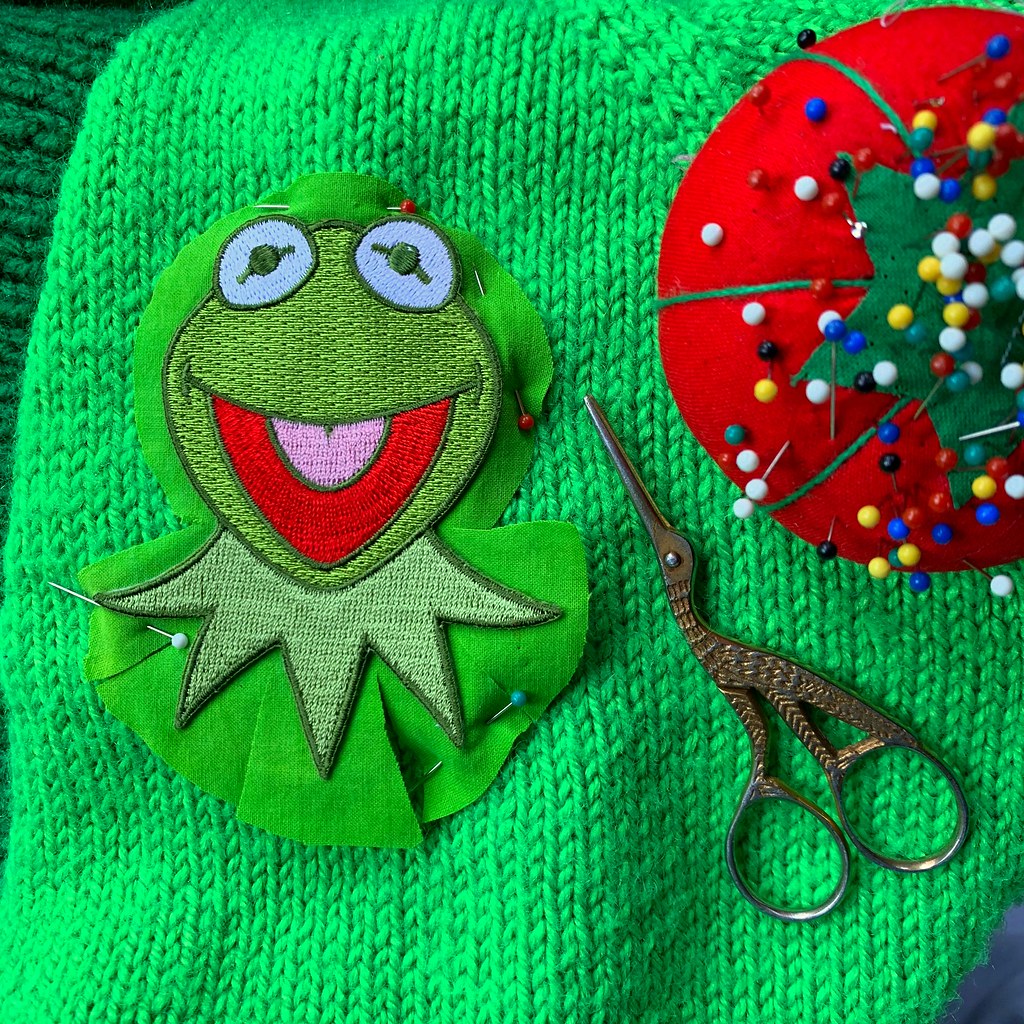 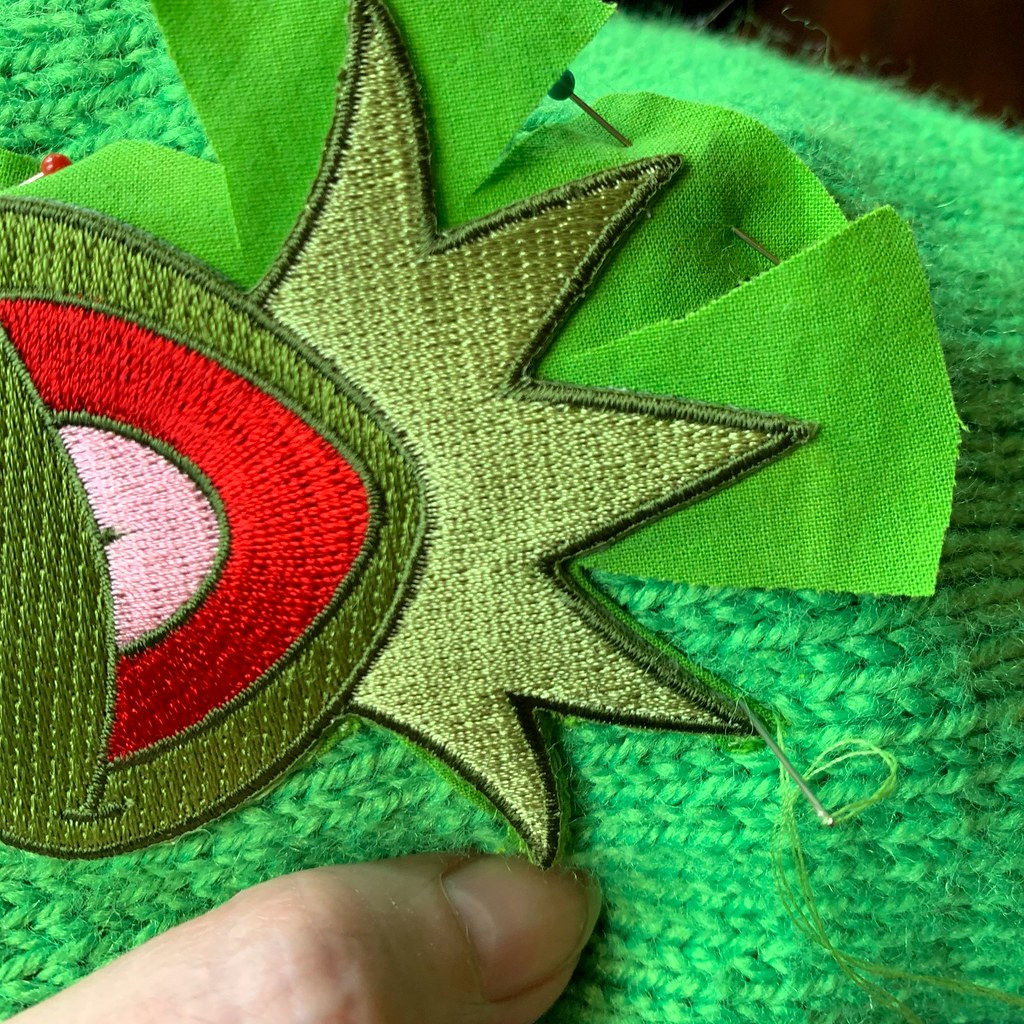 It came out quite clean, and I’m delighted with how securely and neatly it sits on the sweater without pulling or causing it to sag. 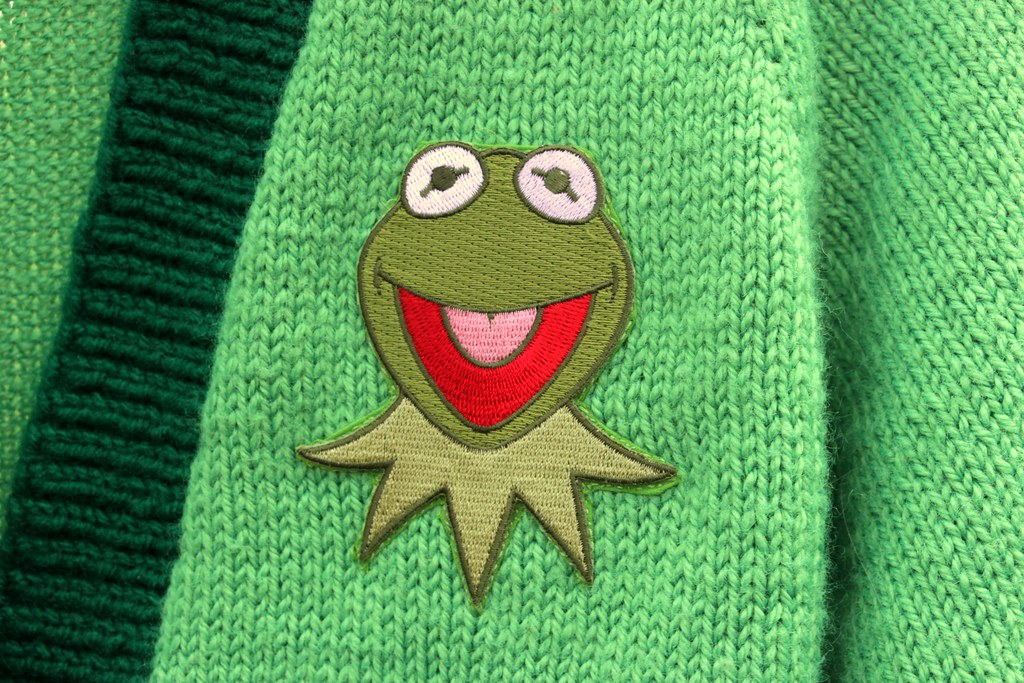 I hemmed the inner piece of cotton and tacked it at the corners, to catch all the thread ends and knots and to further stabilize the patch. I had a good laugh, as my brother joined me during this part and recognized the Kermit collar points and silhouette from this back side, asking, “Are you sewing a Kermit onto that sweater??” 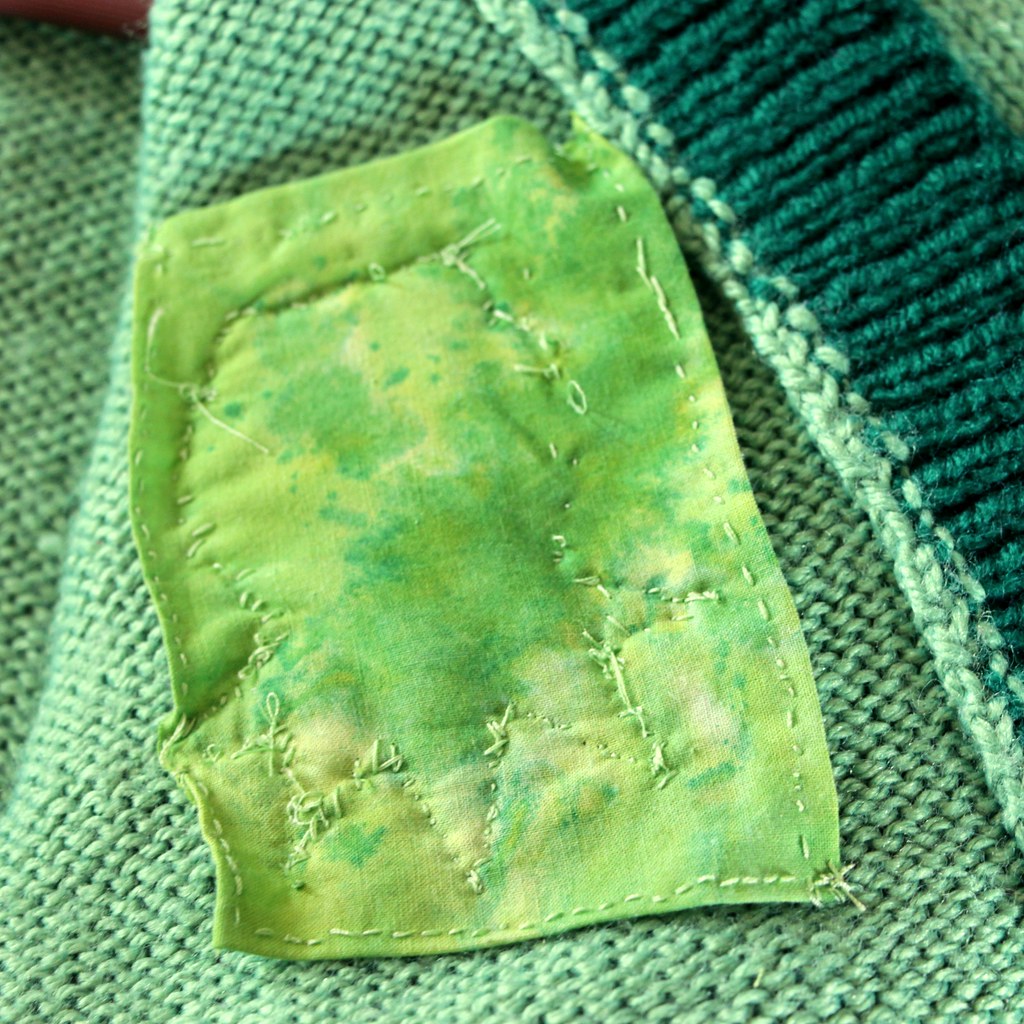 It feels lovely to be so understood.

The buttons are a cheery red plastic value pack that I found on eBay back in 2012. I like the contrast and extra little zip they give. At the time I was preoccupied with button bands gapping, so I made these nice and wide, then placed the buttons so closely together that it is nigh on impossible for them to gap at all. Having all these big, bright goofy buttons works with the aesthetic, and I am even more charmed than I expected to be by the whole effect. 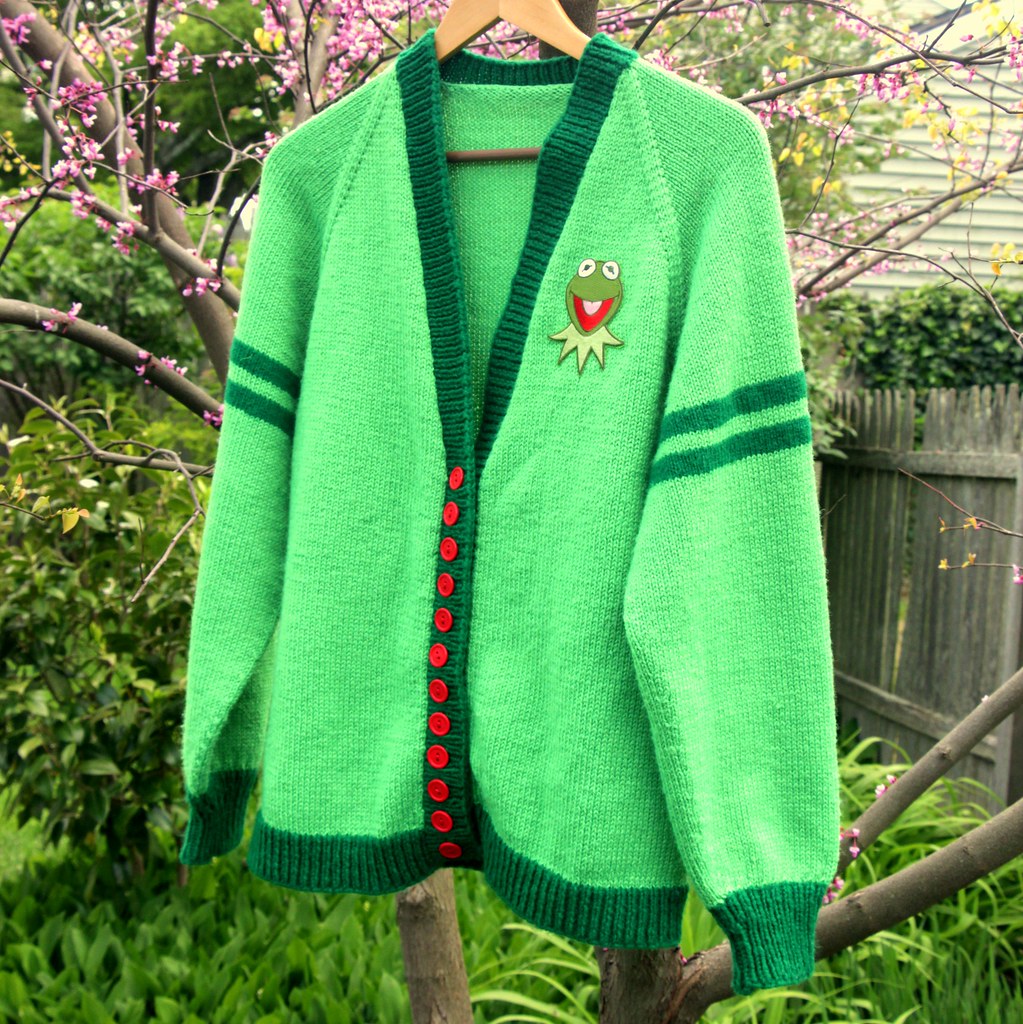 Overall I’m thrilled with this project and so glad I took my time in making the decisions I did to get exactly the silly idea I had in my head to become a reality. One of the things I love most about knitting is that you can make anything you imagine, in any size or color you like, with whatever details you want, and you will end up with a one-of-a-kind handmade creation. I am also delighted with the success in making a sweater custom to my measurements so that the sleeves have the right roominess I was looking for, the V-neck hits in just the right spot on my bust, and everything is the right length and fit for a truly comfortable, just-my-size, just-my-style, and just-my-level-of-ridiculous cardigan.

Or as Kermit would put it…

I just had to post another FO before the year ends, and as it happens, this one was a surprise favorite. In my mother’s family, we do a Secret Santa exchange among the adults, each person giving someone else one (or a few) big, personal gifts rather than everyone getting something small and impersonal. My recipient was my cousin’s new wife, whom I barely know, and all of the family told me she just wanted an Old Navy gift card. Begrudgingly, I bought her the gift card (I hate gift cards), but I thought “Well I’m knitting her something too.” I had an extra skein of Patons Brilliant from Hope’s shrug, and I knew I liked the way it knit up on size 10.5 needles. I had intended to knit a Branching Out, but I just didn’t like the way it looked. Most of all, it took me several hours to do just a few pattern repeats. It’s a great pattern, but this wasn’t the time for it. Seeing as I was starting this gift with a matter of hours to go (and a pile of baking, wrapping, errands, and other knitting to finish as well), I needed a pattern that would go quickly, stretch the yardage, and look good. I started and frogged probably five different scarves in the middle of the night between the 23rd and 24th, and I was starting to feel despondent. I remembered how nice the vine lace stitch pattern looked on the Jellyfish shrug, and with a tiny bit of math and some fiddling, I cast on in the wee hours of Christmas Eve, conking out to sleep after a few successful pattern repeats. The next day and night, I knit like a fiend, relying on muscle memory and repetition to carry me through the lace. Thankfully, I didn’t make any big mistakes, I didn’t have to frog a stitch, and it came out smoothly and beautifully. I collapsed asleep near dawn on Christmas morning, thinking “I wonder how I’ll block it?” as my head hit the pillow. Blocking was what made this scarf. As it is a synthetic fiber, I was nervous that it wouldn’t open up nicely. I didn’t have time to soak it and pin it out, and I didn’t think that’d make a huge difference anyway. I had read about steam blocking online, but I wasn’t sure I wouldn’t melt the metallic bits in the yarn.

Cautiously, I laid the scarf out on a towel and used the iron spritzer to get it gently damp. I used my fingers to spread the lace to the desired measurements and with the iron on the “nylon” setting (thinking that was the most flammable of the materials), I gently steamed it open. It came out spectacular, the fabric actually a bit softer but maintaining its lace integrity. I had picked this stitch pattern because it looked alright unblocked, but when pressed and spread out, it becomes a whole new level of elegance. Though I don’t really consider it a “design” in any appreciable sense, I really loved this process, and I’m already planning to knit another of these scarves. In all my rush to get the gift wrapped and out the door on Christmas day, I neglected to even measure it, having simply worked until I was almost out of yarn and it felt like a decent scarf length.

My cousin’s wife loved it and didn’t believe it was hand-made at first. She thought it was just a lovely store-bought trifle included with her gift, and when my aunt shared that I’d knit it, she was amazed. I was hoping it would become more special to her than the gift card, and based on her immediate wearing and subsequent admiration throughout the night, I think she will enjoy it for years to come.

I’m going to make another scarf for measurements and additional photos, then I’ll make this pattern available for free in the new year. It’s a great one-skein project and I think it made a pretty perfect little gift.