When I first started knitting, documenting every stage of the project and its progress was almost as important to me as the actual stitches. As life grew more complex, I became complacent about knit-blogging (perhaps you’ve noticed) and considered it quite a feat if I got the cursory details slapped up on Ravelry, let alone took a photo. I’d like for that tendency to change, and I’m giving myself permission to enjoy this part of the process again too. 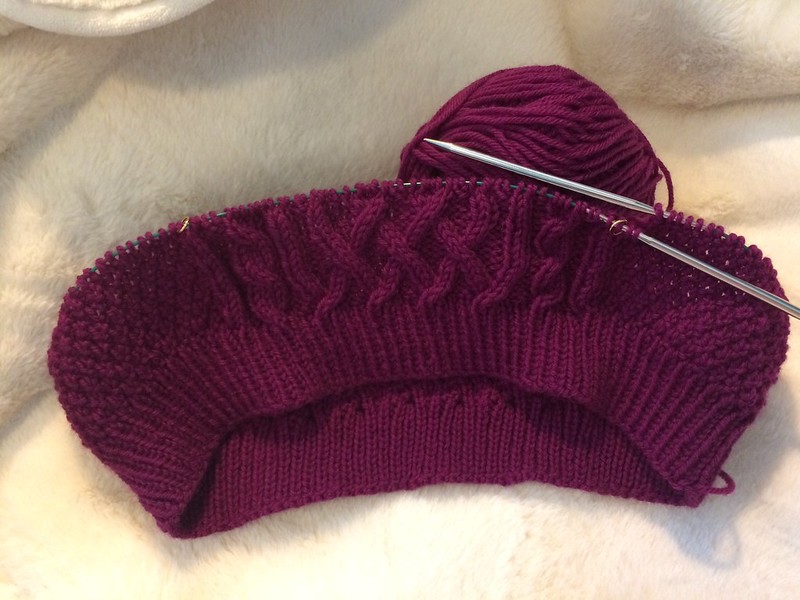 During a lengthy stay at my parents’ house this winter, I was buying new yarn for a pair of socks I’m knitting for my brother when I had an irresistible hankering to knit a sweater. Drawn in by the allure of free shipping and a Valentine’s Day sale that made this yarn shockingly affordable, I found a pattern for the Olwen Sweater, a beautiful seamless cabled pullover with a lovely yoked raglan-sleeve construction. In a cushy worsted-weight yarn, with this delectable purply-magenta color, it has been an absolute delight.

When I got back to my apartment in April, I found a few places where I’d flubbed the pattern (I started it when I had a fever, after all), so I ripped back to the ribbing, and it’s been smooth sailing since. I’m now past yoking the sleeves to the body, which was way easier than I’ve always imagined it would be, and I’m cruising toward the finish just in time for what promises to be a sweltering hot summer. Fortunately, this sweater is in a style, color, and quality I foresee myself enjoying for many years to come, so it will keep. 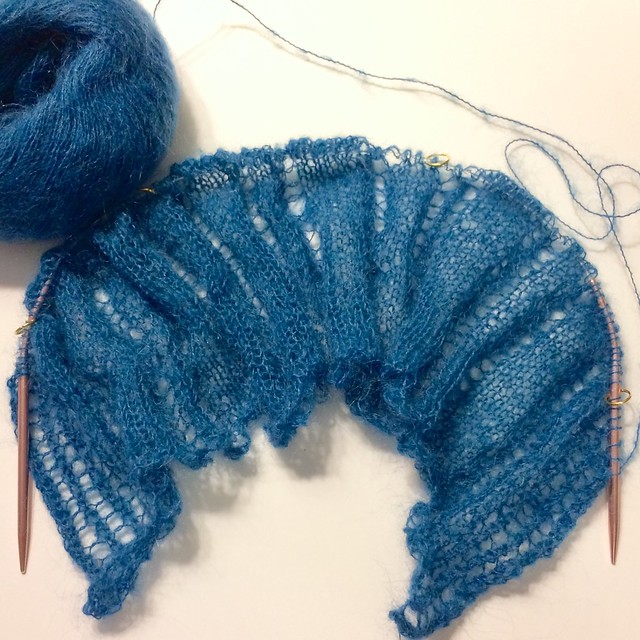 As I was returning to the shore this Memorial Day weekend, it seemed impractical to try to squeeze a nearly-finished wool sweater into the already overstuffed backpack I was bringing, so I tried to think of a good traveling project. I landed on a new cast-on for Kieran Foley’s Seascape Stole, a gorgeous undulating pattern that’s been tempting me since it was published in the summer 2008 Knitty, and for which I’ve had this yarn earmarked since June of 2009 (yikes – that feels like it just happened).

As I am working it on a 16-inch circular needle and only using one page of the chart from the 2015 revised version, this project currently fits in a small sandwich bag, making it ultra portable and quite a pleasure to knit on the go.

I hope to share a lot more this summer, as I am coming back to the surface in many areas of my life.

I don’t know why I’ve never knit a DROPS pattern before, seeing as there are so many gorgeous free ones out there that appeal so specifically to my taste and style. All that is changing now. 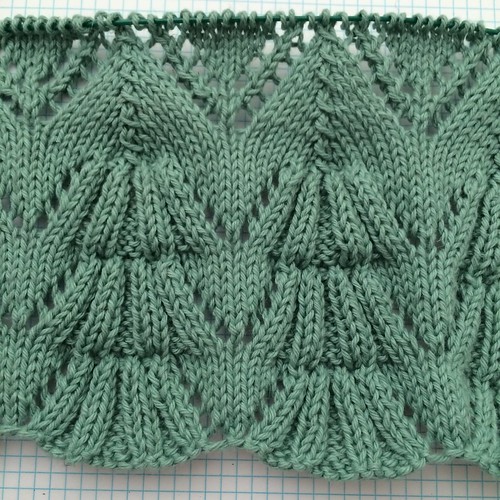 Described as DROPS 113-33 Jacket with Lace Pattern, I’ve rechristened it my Art Deco Lace-Edged Cardigan because the pattern reminds me so much of my favorite details from Art Deco architecture, especially the Chrysler Building’s spire. 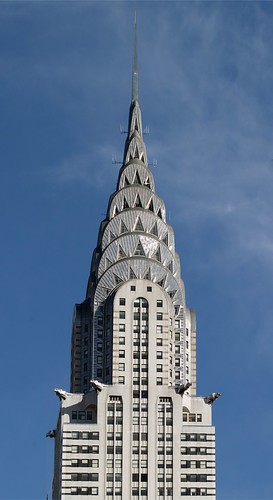 I’m knitting it in a lovely sagey blue-green shade of CotLin DK, a cotton and linen blend that is quickly becoming one of my favorite yarns.

This project has everything I love about knitting going on, and I’m enjoying it so much already.

(Actually I have no truck with cables, but I couldn’t resist the rhyme.) 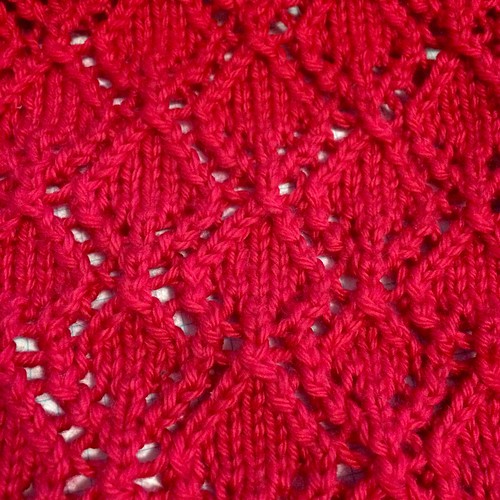 This weekend, cranky about the snow, I finished knitting a bright pink seamless lacy sweater. I didn’t weave in the ends or find / sew on buttons yet, but I’m already really happy with how this one is coming along. And if the temperature ever rises consistently out of the 30s this spring, I’m looking forward to wearing it over floral, springy dresses.

It seems strange to knit a sweater in the middle of a heatwave. And yet, it feels so right.

I’ve moved on to the second sleeve since taking this photo, and I think I may have a finished shrug quite soon.

I did something today that was simultaneously unusual and utterly in keeping with my most ingrained habits and tendencies. I cast on for a new project.

I’ve been at my job just over a year now, and I truly love it. I recently got a very nice promotion, so apart from the few weeks where I rarely left the office before 8pm, it’s going swimmingly. The downside is that its demands plus my still very long commute leave me with little time or energy to do the crafty things I used to enjoy so frequently at home. My company is closed for the next two weeks, so I am trying to take advantage of the time off to get my home life back in order.

While ordering Roman shades for my bedroom (I’ve been living with the vinyl blinds my landlord provided when I first moved in back in 2010… which I’ve since broken) I also did a little bit of online clothes shopping for some summer pick-me-ups. I’m pretty picky about the value of clothing, especially after working in retail and coming to really understand the vast difference between fabrication, wholesale, and retail pricing.

I bought two more pencil skirts just like the dozens in my closet, and while they were seriously marked down, I kept thinking, “These things have three, maybe four seams and a zipper. Why do I routinely spend so much money on something I could so easily make?!” I have owned a sewing machine for years (it may or may not still be in working order). Back in 2007, I bought two patterns and fabric (which has all since been lost or wrecked) with the sincerest intentions to learn to sew skirts and dresses. But I never sealed the deal, and I have no idea why not.

Another thing that occasionally troubles me when buying clothes (especially at such discounted prices) is that I can’t really know if they were produced in ethical labor conditions. I try to shop only from companies with solid reputations, but unless you are making the clothes yourself, you can’t actually be sure that no one was exploited or mistreated for your super cute new sundress (not that this qualm has stopped me from buying anything lately – but it does hover in the back of my mind). It is my hope that I can learn to sew basics like skirts and dresses, maybe even blouses, and that in addition to benefitting from custom sizing and choosing the fabrics of my dreams, I will no longer have a closet full of morally ambiguous textiles.

But I’m getting quite a bit ahead of myself. That aqua-blue yarn you see above? It’s cheerily on its way to becoming this: The Viennese Shrug, from Interweave Knits Summer 2005. I’ve been wanting to make this lacy shrug since 2007 (I had a lot of good ideas back then) and just like my intended sewing projects, somehow never quite got around to it.

But that good-intentions-poor-follow-through habit is precisely the one I plan to break, starting now.