Every year around mid-October when I catch the first briskness in the air and realize autumn is properly settling in, I get a hankering to knit like mad. I am super behind on knit-blogging (literally – there are multiple, elaborate sweaters I have finished but haven’t photographed yet!) but I will be working through the catch-up pile soon. Meanwhile, as I finished a pair of socks and had some size 1 needles free, I decided there was no time like the present to have another crack at colorwork… 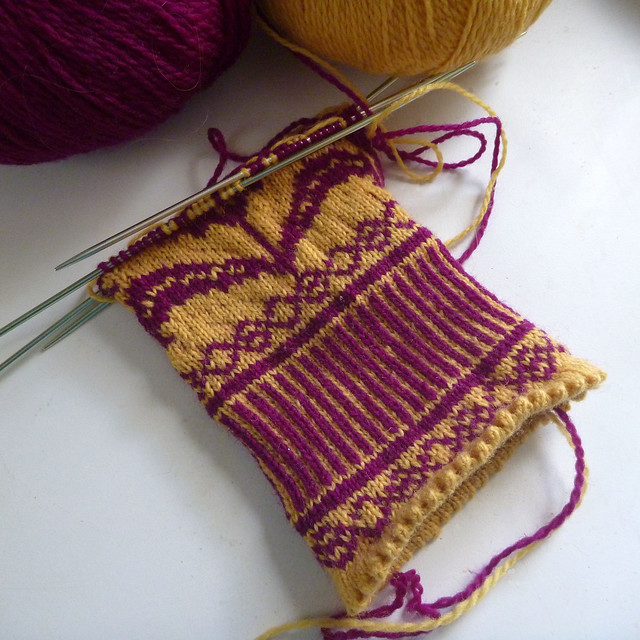 As I started working on the Chrysanthemums mittens from Knitty, it occurred to me that chrysanthemums are the birth flower for November, so these would make an excellent birthday present to myself (November 1). 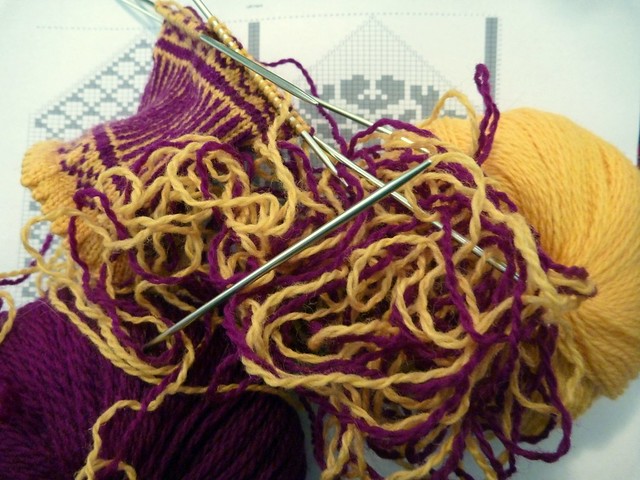 In the first pass I made the background of the main section yellow and the chrysanthemums this purplish fuchsia, but it looked drab and I really disliked how much the strands in the back showed through with the tension issues I was having. I also realized that if my intent is to (ultimately) have these mittens go with a Selbu Modern beret as planned, they wouldn’t coordinate well in reversed colors. 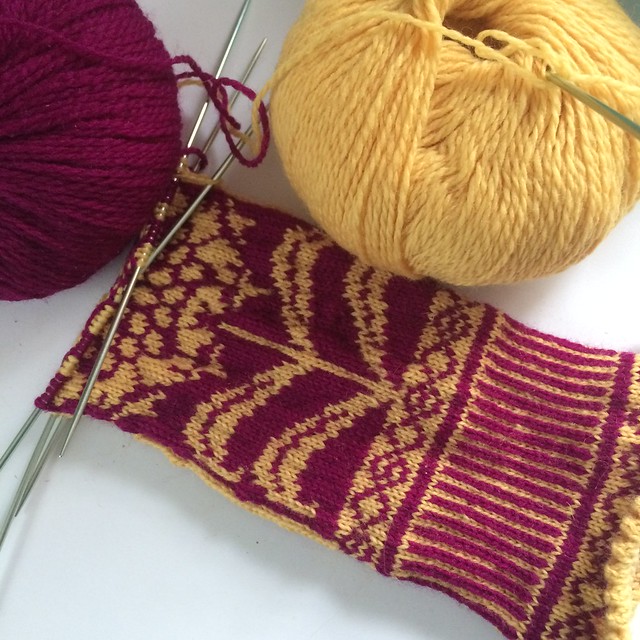 I ripped back to the cuff but decided to keep the picot trim and wrist section with a yellow background for contrast. I’m much happier with the color combination now and excited to see how these come out!

I’ve attempted colorwork haphazardly before, but this is my first real Fair Isle project. As long as I’ve been knitting, the concept of stranded knitting has eluded me, seeming closer to wizardry than a fairly easily learned skill. It turns out there really isn’t any great mystery: you knit with one color, then the other, and you gently float the yarn you’re not using across the back. That’s really it. Of course, maintaining an even tension that results in neither floppy stitches or excessively tight strands is its own gamut, but so far, I’m cautiously optimistic about my ability to do so.

As this is a beret (specifically Kate Gagnon Osborn’s exquisite Selbu Modern), I have some concerns about it fitting my gigantic Irish head. Looking at the many projects on Ravelry, I was charmed by all the color combinations. It took me a while to come up with these two together, but it really shouldn’t have, as lately I’ve been obsessed with magenta and yellow in everything I do. Learning Fair Isle opens up a world of possibilities in multi-color knits. I am also utterly delighted by these tiny, lovely little stitches dancing together. This is a very joyful project, which is exactly what I needed in the middle of winter.

Much like the sock sagas of days gone by, I am not having an easy time coming up with a basic hat for my brother’s birthday.

His request was simple. He sent me a photo of a hat he wanted, and we brainstormed. The original was wool, but he is a fishing boat captain, so I knew this hat would get damp and need to be washed frequently. We picked Cotton-Ease to make it machine washable, and I suggested gray, black and blue. I found a simple hat pattern online and thought I could whip it out in a few days for his birthday on November 3rd. The first hat did indeed zip along (you must see where we’re going with the “first” thing, right?). I figured out how to strand my knitting to make a diamond pattern that I thought was pretty spiffy. The trouble was, the band of stranded stitches made this hat tight. Before blocking, it fit snugly on my head, and my brother has a much bigger head, with thick curly hair to boot. I tried to maintain hope, soaking it and stretching it like crazy while it was wet, then periodically throughout blocking. Because there were so very many ends, I decided I’d have my brother try it on before I finished it completely, and as I feared, it was much too tight. It also seemed too long, so I made mental notes on modifications and resigned myself to knitting a second hat. At his suggestion, I changed the pattern a bit, though I prefer the first. I moved up a needle size and knit it flat so that I could do proper intarsia, thinking it would all stretch uniformly. I resisted casting on extra stitches, as this pattern was supposed to fit a man’s head and I was sure it was just the stranded bits making it too tight. With many, many more ends to weave in, I stretched it around my brother’s head before I even sewed it up, and it barely went all the way around. He looked at me grimly and said “Better get going on a third.”

I am still hopeful that once it’s seamed, it can stretch more than it did in that cursory fitting, but I worry that it’s still going to be too small. I don’t think I have enough gray yarn left and because I cut so many pieces for the intarsia bits, I don’t think I can reuse hat #2’s yarn.

Technique-wise, I have no idea what I would do differently besides casting on more stitches. I preferred stranding to intarsia, but I didn’t exactly love either one.